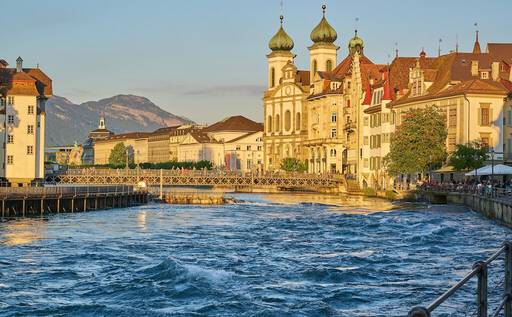 Economic prosperity on the shores of Lake Lucerne

With a population of about 82,000 people, Lucerne (German Luzern), located on Lake Lucerne and surrounded by mountains, is the seventh most populous city in Switzerland and a capital of the canton of Lucerne. The local people speak German. The city and the canton thrive, owing to a low corporate tax compared to other cities of the Confederation. The economy is built on the health sector, machine manufacture and civil engineering. Additionally, Lucerne is also home to huge concerns such as Schindler, Electrolux, Merck/MSD Schweiz or B. Braun Medical. Although established quite recently, in 2000, the city's university has already gained international reputation in law. This charming city, whose name means “a lantern”, is widely recognised for its medieval architecture. It occupies both banks of the Reuss River, the largest in Central Switzerland, which divides it in two: Altstadt (the old town) on one shore and Kleinstadt (the small town) on the other. One of Lucerne’s famous landmarks is the Chapel Bridge (Kapellbrücke), one of the oldest and longest wooden bridges in Europe. The bridge was destroyed by fire in 1993 and rebuilt afterwards. Other must-see attractions include the 16th century ramparts, as well as churches, towers and 225 fountains with potable water, all in the old town.

The capital city of the canton of Lucerne is located in central Switzerland, a 40-minute ride from Zurich and Zurich airport, which can be easily reached with an excellent public transport network. Located in a paradisiacal setting, between the azure waters of Lake Lucerne and snow-covered Alpine peaks, Lucerne is one of the most visited cities in Switzerland. The canton’ official language is German, but the main spoken language is the local variant of the Swiss German dialect. English is in turn widely used in the world of business. The prices of properties in Lucerne are high. Apartments located in historical buildings are usually beautifully renovated and luxurious. Therefore, it is impossible to live in Lucerne without having a large income, especially that the city attracts masses of tourists and vacationers. In summertime, residents of Lucerne relax on the beach by the lake, which they exchange for skiing in the Alps when winter comes. Finally, Lucerne is also a city of music. The local Kongress und Kulturzentrum (KKL) hall holds 2,000 seats and hosts 500 concerts each year. Cuisine lovers must obligatorily try Chügelipastete, Lucerne’s traditional dish, i.e. a vol-au-vent pasty with veal, mushrooms and raisins. 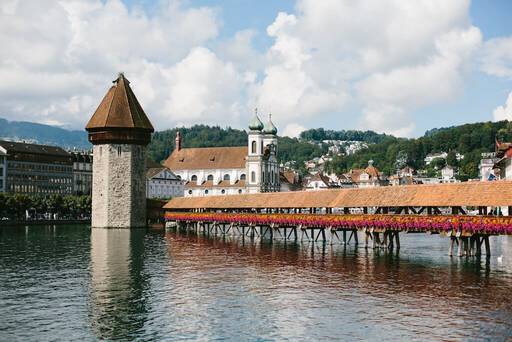