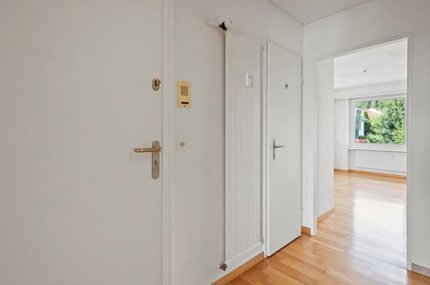 Urban, dynamic, sporty and cultural on the banks of its river

Dübendorf is located in the German speaking administrative district of Zürich. It is located on the Glatt, a tributary of the Rhine. It is the fourth largest city in the canton with nearly 29,000 inhabitants. It is part of the greater Zürich area. The financial metropolis is a dozen kilometers away and is easily accessible by reliable and well-organized public transport. At the beginning of the last century Dübendorf was still a small agricultural municipality. It owes its development to the construction of an aerodrome in 1910, then an airport before it was moved in 1948 to Kloten. The population stabilized in the 1970s and began to increase again after the inauguration of Stettbach station in 1990. The town continues to receive new residents on a regular basis. Note that the French Lycée Marie Curie in Zürich is in Dübendorf. The city is home to Switzerland's largest military airport and is home to two research institutes EMPA (materials research) and Eawag (water sector research and management) as well as companies such as Helsana (health insurance), Mobatime (watchmaking), Minimax AG (fire protection), the SV group (catering / hotels) and the organization World Vision Switzerland (child welfare). To see: the Lazarite church (13th century); Dübelstein Castle.

Dübendorf is a growing city and the real estate sector is particularly dynamic in order to welcome a population attracted by the activity of the metropolis and the canton in general. Its proximity to Zürich, however, does not prevent it from having its own identity. The city stretches along both banks of the Glatt, which also serve as a recreation area. Numerous sports clubs, including the EHC Dübendorf (ice hockey) offer a diverse sporting life in high-level facilities. The city center is full of shops and it is a popular place for locals who are encouraged to come by bike since the start of Publibike stations. The Zürich Oberland invites you to hike. The 5,000-seat Samsung Music Hall, near Stettbach Station, hosts concerts, conventions and other events. It is the second largest hall in the region after the Hallenstadion in Zürich (13,000 seats). Aviation enthusiasts will find plenty to satisfy their needs with the Air Force Center. It should also be noted that in 2018, Dübendorf obtained the Energy City label for the third time and for a further period of four years. This label rewards municipalities for their energy and climate policy. The price of real estate is lower than in Zürich but it remains in the Swiss high average.